EFL - ESL activities and games for expressing ability and possibility

An ESL lesson plan for teaching English students about expressing ability and possibility in English. It includes a lead-in activity, several classroom activities and a game. And don't forget, if you use an iOS or Android device, you can get offline access to these materials through the TEFL Handbook app.

The board work below presents the modal verbs for expressing ability and possibility. Students at this level will be familiar with using 'can' to express ability, but probably not 'is able'. The colour-coded text should give you an idea of what information you can attempt to elicit as you step through each of the functional uses. 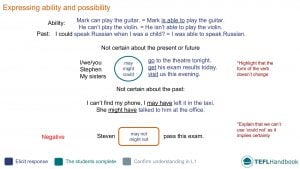 Students will write a few statements about what they might be doing at different points in the future.

For the first part of this activity, have your students work individually to write a few sentences about what they might be doing:

This weekend
In five years
In twenty years

When they have finished, divide them into pairs and have them interview each other about what they have written. Before they start, elicit possible question constructions and follow-up questions and add them to the board.

The students will work in groups to speculate on what might have happened for different scenarios.

Start by dividing the class into groups of three or four and add the following list of scenarios to the board:

1. Somebody sees the Loch Ness monster.
2. A House is on fire while a guilty child looks on.
3. A child lost in the supermarket.
4. Somebody sees Bigfoot when they are camping in the forest.
5. Several people spotted a UFO over New York City.
6. It's raining fish in the street.
7. You wake up one day and there's nobody in your town.

The groups then have to create a deductive sentence for each scenario that explains what could have/might have happened.

When they have finished writing, discuss every scenario along with each group's explanations and try to decide on which one is the most likely. Encourage them to make their sentences as funny as possible.

Working in groups, the students will debate a series of statements.

In groups of three or four, tell your students to discuss the following:

Do you think it's possible to:

You can go two ways with this activity:

1. All groups work on the same statement for a few minutes before comparing and contrasting their results in a class discussion.

2. Each group works on a different scenario and present their opinions first, before opening the topic up to a class debate.

Our suggestions for ESL games and activities require the minimum of resources (whiteboard and markers). At the moment, we have one game idea for expressing ability and possibility.

Students are given a topic about the future and have to talk for as long as possible using the modal verbs they have learned in this lesson.

Start by dividing the class into two teams. On each turn, give a student a topic or question about the future. Next, time that student with a stopwatch while they try to talk for as long as possible.

Award 5 bonus seconds for each correct usage of a modal verb and 20 bonus seconds for using all three (may, might and could). Stop the watch when they run out of steam. Some questions and topics to get you started:

Our suggested next lesson is on using just, yet and already with the present perfect. If you've found these materials useful, be sure to check out our full list of intermediate ESL lesson plans. For other levels, have a look at our complete selection of EFL - ESL lesson plans. If you use an iOS or Android device, try out the TEFL Handbook app. An ESL lesson planner for English teachers. It has a lot more content and gives you faster access to our ESL resources, making it easier to use in class.