The sample board below illustrates one to introduce the passive voice. Start off by transforming the example active statement into its passive equivalent, eliciting as much as possible. After that, elicit some variations of that statement in different tenses. Finally, step through and explain the functional uses of the passive voice. 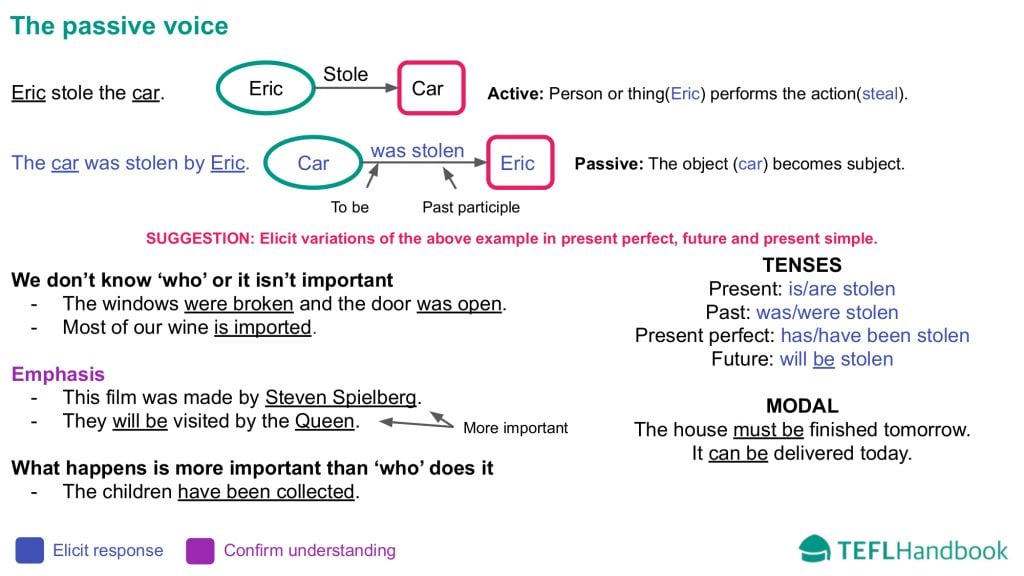 For this writing activity, students will work individually to make passive statements from active sentences.

Add the following active statements to the board and tell your students to modify them to use the passive voice.

1. Thousands of people watched the match on television.
2. Steven has fixed the flat tyre.
3. Every July, the Smiths send their son to summer camp.
4. I will clean the car every Saturday.
5. The council recycle millions of glass bottles every year.

Once they have finished, they can compare their answers with a partner.

Key
1. The match was watched by millions of people.
2. The flat tyre has been fixed.
3. The Smith's son is sent to summer camp every July.
4. The car will be cleaned every Saturday.
5. Millions of glass bottles are recycled by the council every year.

In groups of two or three, students will work together to define a description of a particular process.

Start by explaining to the class that the passive voice is often used to describe a process. Next, tell the students that they are going to work in groups to create a description of an arbitrary activity. Assign each group to a different activity. Some examples you can use:

Making a pizza.
Changing a tyre.
Becoming a doctor/teacher/ninja.
Going to a restaurant.

Before they begin, you could brainstorm any vocabulary you think they might need on the board. Inform the class that they must use the passive voice as much as possible.

When finished, groups read their descriptions to the class. Listen for missed opportunities to use the passive voice and elicit suggestions from the other classmates.

A fun writing activity where students work in groups of two or three to report on a news event.

Inform the class that they are going to write an imaginary news story. These stories must contain at least five examples of the passive voice and be in an assigned tense.

Split the class into groups of three or four and assign each group to a news story and a tense. You can spend some time eliciting fun news stories with the class or use the examples below.

Present perfect: A storm has hit their village
Present simple: Tour of the capital city
Past simple: A bank robbery
Future: Their hometown will build a 100ft statue of Homer Simpson. 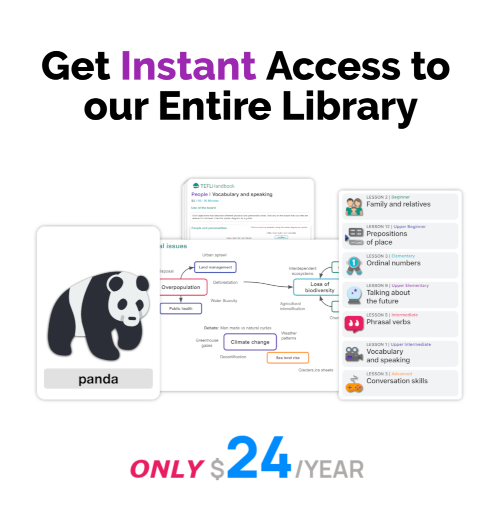 Players have to describe a passive sentence to their teammate in the hot seat.

Divide the class into two teams. On each turn, one student will sit with their back to the board, facing their teammates. Next, you'll write a funny passive statement on the board. Players must then describe the sentence to the person in the hot seat without using any significant words from it.

The student in the hot seat must first say the passive sentence from the board, then convert it to its active form before the round is over. Set a time limit/stopwatch if you wish. Some example statements to get you going:

1. English is spoken by dangerous people.
2. Thousands of cars were stolen by monkeys.
3. The Pokémon was killed by Antonio Banderas.
4. McDonald's has been robbed by Manchester United.
5. The horses will be ridden by angry penguins.

To make it easier for the students to organise their explanations, divide the sentence on the board into three parts: the subject, verb and object.

If you've found these ideas useful, be sure to check out our complete list of ESL lesson plans for intermediate level students. For other levels, see the entire collection of ESL lesson plans. Also, iOS and Android users can access all of our materials through the TEFL Handbook app. An ESL lesson planner for English teachers. 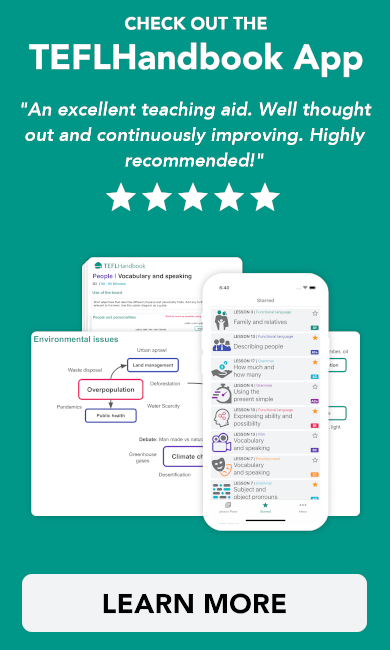