This free advanced ESL lesson plan is the second of three lessons on Entertainment. It contains classroom activities and games that teach students how to add emphasis to their statements.

Step through the different techniques and focus on how they are used to give more emphasis to a subject. Work through an example of each type with the class and try to elicit a modified sentence that demonstrates the rule. 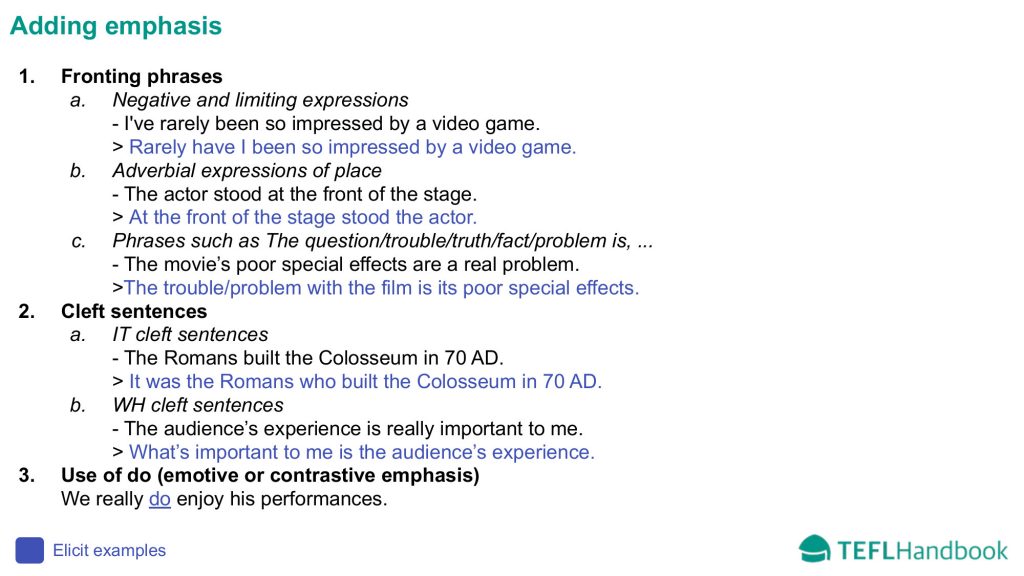 The students will rewrite phrases to make them more emphatic.

Start by adding the following sentence to the board.

Ask the students how the sentence could be modified based on the emphasis techniques they have just learned. Elicit examples and add them to the board. For example:

Next, have the students rewrite the following sentences to make them more emphatic, using the techniques covered in this lesson.

1. I don't have a lift, but I have money.
2. I've never seen such a thought-provoking play.
3. I don't like its treatment of the female protagonist.
4. I can't afford a ticket. That's the problem.
5. A fighter in a black gown stepped into the arena.

When your students have finished, they should spend some time comparing their sentences with a partner. At this point, encourage them and ask questions about anything they don't understand.

Finally, quickly step through each sentence and elicit some solutions from the class.

In pairs, students have to create sentences that blend the language for the lesson with phrasal verbs related to the theme of the current unit (entertainment).

Add the following phrasal verbs to the board and have the students work in pairs to create sentences that use the grammar for this lesson. They should have one emphatic sentence for each rule. Elicit the meaning of each verb as you add it to the board, providing examples where necessary(See the definitions below).

At the advanced level, students should attempt to make their sentences as interesting and complex as possible. Therefore, encourage them to test the boundaries of their understanding and ask questions when they are not sure.

Suggestion: When correcting this activity, have the students volunteer their sentences and discuss any corrections or misconceptions as they arise. Document these to the board so that the other students can copy them.

Definitions
1. To rip off:
a. To plagiarise or copy original work.
b. To charge too much for something.
2. To sell out:
a. Sell all the tickets for (Sth).
b. Betray a principle/value for personal advancement.
3. To blow (sb) away: To impress someone very much or make them very excited.
4. To tone down: To make something less severe, shocking, or offensive.

For this activity, we're going to prepare students for their homework assignment.

Start by writing the title of their homework assignment at the top of the board.

"The future of entertainment and leisure."

Explain to your students that they are going to research and write an article on this topic. Inform them that they will be playing the part of a journalist who has no prior thoughts or opinions on the subject. Encourage them to keep their reports to four paragraphs, brainstorm a possible outline for the essay and add it to the board. Students can choose to follow this or come up with their own. An example might be:

Paragraph 1: Introduce the topic
Paragraph 2: What people will do more/less of?
Paragraph 3: The effects(negative and positive) on society and culture.
Paragraph 4: Conclusion

Suggestion: Encourage students to look for at least three opportunities to apply the grammar structures that they learned in this lesson. Ask them to underline these before they hand in their work.

Review the homework as a group as a warmer activity in the next lesson (See the sample board work).

In teams, students will work through a list of idiomatic expressions and try to compose definitions.

Start by dividing the class into two teams. Then tell your students that you are going to write a list of idiomatic expressions on the board and that they must attempt to write a definition for each one.

Here is a list of idioms that you can use. Add them to the board(without definitions) and either set a timer or end the game when the first team has finished.

1. The show must go on: an event or activity must continue even if there are problems or difficulties.
2. To steal the show: To do something that will win the highest praise.
3. In full swing: (Sth) is at its busiest or liveliest time.
4. Guilty pleasure: Enjoying something which is not generally held in high regard, to the point that arouses feelings of guilt.
5. Have a ball: Enjoy yourself immensely.
6. (the) punch line: The funny part of a joke.
7. Paint the town red: Go out and enjoy a lively evening in bars.

When counting the scores at the end, the team with the closest interpretation wins the point.

We hope that you found a few of these ideas useful. If you did, be sure to bookmark our complete list of advanced level ESL lesson plans, as well as our entire collection of ESL courses.

Download
Printable versions of all resources are available to members. View a sample
Plan your lessons on the go
A mobile app for English teachers
Download the app