This C1 ESL lesson plan is the second of three lessons on the theme of conspiracy theories. It contains activities, games and resources for teaching advanced conditionals.

Step through each type of phrasal verb with the class and try to elicit examples where possible. 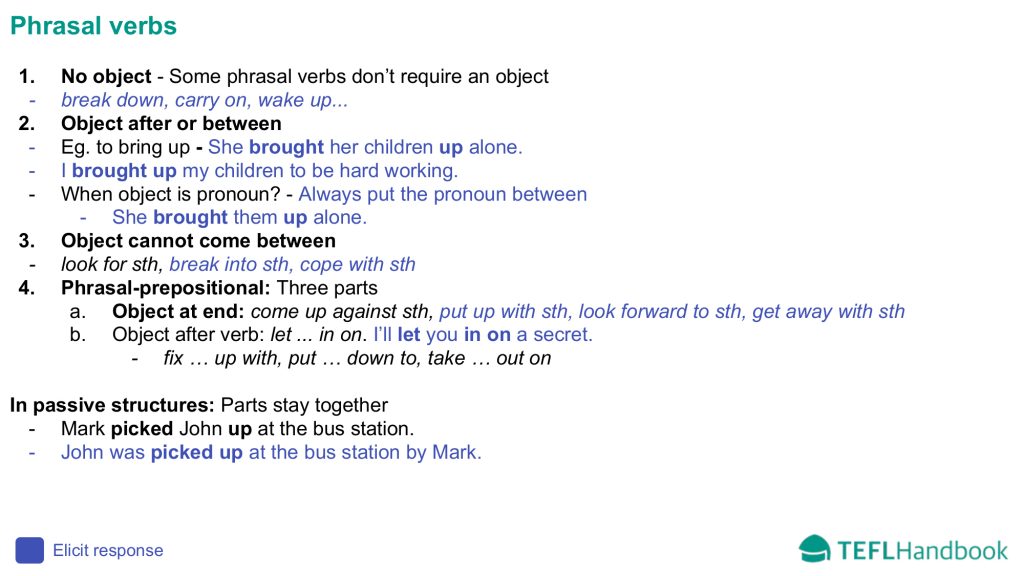 The students will take some time to familiarise themselves with the target language for the lesson.

If you have worked through the board work for this lesson, Add the following style of prompt to the board.

1. Sarah said she needed to think it over for a while.
2. Who'll look after the kids while we're out?
3. What time will we need to get up?
4. I would have stayed if John hadn't turned up.
5. Did you always get on so well with her brother?
6. It's dark in here, take off your sunglasses.
7. Do I have to put up with this nonsense every day?
8. Make sure you don't forget to put your helmet on.

Explain that the students must work in pairs to decide which type of phrasal verb they are:

1. No object
2. Object after or between
3. Object cannot come between
4. Phrasal prepositional (Three parts)

Before they begin, discuss the solution to the first one together. Allow as much time as is necessary and correct the exercise as a group in the end.

The students will work in pairs to create humorous sentences using phrasal verbs.

Start by adding the following list of phrasal verbs to the board:

Next, divide the students into groups of 3-4 to work on the following tasks:

If any of the groups are stuck on a definition, you can give them a simple example sentence and elicit the correct meaning. Or let them search for the web using their smartphones.

When the students are ready, correct the exercise as a group and add the most humorous solution to the board as you go. To make it more fun, you could turn it into a game and award points for correct usage and funniest sentence.

For this activity, we're going to prepare students for their homework assignment.

For homework, the students will have to write an opinion essay on the American conspiracy theorist Bob Lazar.

If you have 10 minutes and the students have access to smartphones, we can spend some time preparing the students for their essays.

Start by writing the question "Who is Bob Lazar?" on the board. If any of the students are aware of him, use that to drive a short discussion.

You may want to read up on this beforehand. However, if you and the students have access to the internet, you can all spend 5 minutes researching before coming together and having a group discussion.

If you don't have access to the internet, read the students the background information below and move on to the essay structure.

When the students have an overview of who Bob Lazar was, add the title of the essay to the board:

"Is Bob Lazar telling the truth?"

Explain to your students that they are going to write an article that argues a response to this question. They have to decide which side they want to take. Encourage them to focus on two arguments and use the following outline. Elicit as much of this as you can through group discussion.

To make it more interesting, challenge your students to use at least one phrasal verb in each paragraph.

Background information
Bob Lazar is an American conspiracy theorist who claims to have been hired in the late 1980s to reverse-engineer purported extraterrestrial technology at what he described as a secret site called "S-4". Lazar alleges that this subsidiary installation is located several kilometres south of the United States Air Force facility popularly known as Area 51. Lazar claims he examined an alien craft that ran on an antimatter reactor powered by element 115, which at the time had not yet been synthesised. He also claims to have read US government briefing documents that described alien involvement in human affairs over the past 10,000 years. Lazar's claims resulted in bringing added public attention to Area 51 and fuelling conspiracy theories surrounding its classified activities. He admits that he has no evidence to support his core claim of alien technology. Lazar's story has since been analysed and rejected by sceptics and some ufologists. Universities from which he claims to hold degrees show no record of him, and supposed former workplaces have disavowed him. In 1990, he was convicted for his involvement in a prostitution ring and again in 2006 for selling illegal chemicals.

Players have to represent terms related to conspiracy theories on the board while their teammates guess what they are.

Start by dividing the class into two teams. On each turn, give a student a conspiracy related term. That student must then represent it on the board using only images and symbols. Their teammates earn a point when they guess it correctly.

Set a timer for each round and tally the scores up at the end of the game. The team with the lowest time score is the winner.

If you're stuck for ideas, here are a few to get you started:

We hope that you found a few of these ideas useful. If you did, be sure to bookmark our complete list of advanced level ESL lesson plans, as well as our entire collection of ESL courses.

Download
Printable versions of all resources are available to members. View a sample
Plan your lessons on the go
A mobile app for English teachers
Download the app